"These red 'raptors are straight-forward killing machines. Once they know you're around, every red in the area will rush to your location. As with their smaller cousins, these dinos like to hump in to get a hold of their prey. Use this to your advantage when you're trying to fend 'em off."
—Manual Description.

Deinonychus is an enemy encountered in Jurassic: the Hunted and are the quaternary antagonists, as well as the most common enemy in the game.

The Deinonychus is a large dinosaur, being man-sized, and muscular in appearance. Its hands feature three claws, along with its toes, however, much like the Velociraptor, the Deinonychus has the "killing claw" that Dromaeosauridae family is so renowned for.

The dinosaur can come in three variants, the default and most common red, the semi-rare green, and the pretty rare purple variant.

The first variant, a red variant, is the most common one the player can encounter. It's first seen in "Whiskey Tango Foxtrot", shortly before the ending of the level. It has red scales, a beige underbelly, golden eyes, and lastly, it features a row of spines on its back.

The green Deinonychus is seen in "Sinking Feeling", where it's initially seen eating a carcass with another variant of the species. They sport the same aesthetics as red ones do, however, they have a green color scheme, with black-ish green stripes running down their sides, instead of the red scales the former possesses.

The last, and most rare, is a purple variant of the Deinonychus. As per the others, it features the same aesthetics, yet instead of green, or red, it has purple scales. The purple version is completely absent from the Wii and PS2 versions for unknown reasons.

The only gameplay differences between the variants is how commonly they appear in the campaign. For example, the red variant appears commonly in the early sections of the game. They are slowly overshadowed by the green variant, which is then subtly made less common in favor of the purple variant.

The Deinonychus is the most commonly encountered enemy in the game. As such, they are the enemy that the player should prepare for the most.

There're a few weapons that're prime to combat this enemy. The Shotgun works very well up close, usually granting an instant kill within five feet. The 5.56 Assault Rifle works at range to deal with these creatures when they're running towards the player, but are still ten or so feet away. Utilizing Adrenaline Mode alongside either of these weapons in their prime ranges will effectively double the efficiency and damage potential for the player.

A non-lethal, but life saving tactic is to make the Deinonychus stumble, either by shooting it in the foot, or by melee, causing it to trip and roll forward. It takes about three to five seconds for the Deinonychus to recover, giving the player enough time to shoot it with any available weaponry on hand, which will result in an easy kill.

A pair of red Deinonychus.

Green Deynonichus
Add a photo to this gallery 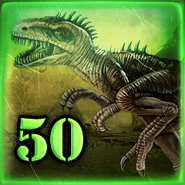 Trophy "Welcome to the Jungle", gained after killing 50 Deinonychuses. 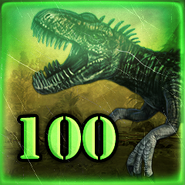 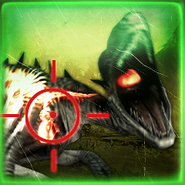 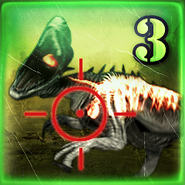 Trophy "Not so Fast", gained after killing 3 raptors with Adrenaline. 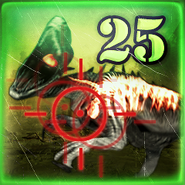 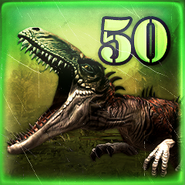 Trophy "Dinomite", gained after a total of 50 raptors with instantly. 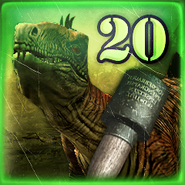 Trophy "A Blast in the Past", gained after killing 20 dinosaurs with grenades.
Add a photo to this gallery

Retrieved from "https://jurassic-the-hunted.fandom.com/wiki/Deinonychus?oldid=4605"
Community content is available under CC-BY-SA unless otherwise noted.