Start a Wiki
The Velociraptor is one of the first enemies encountered in Jurassic: the Hunted, and are the most minor of all of the antagonists.

It is a small enemy, and is relatively harmless in comparison to others, like the Utahraptor.

The Velociraptor is very small in size compared to the others. These dinosaurs typically have a body color of yellow-beige, or the rarer albino variant, with grey-white skin and red eyes. These rare versions first appear in the caves. No other known variants show up in-game other than these two.

The dinosaur has an elongated snout, with multiple teeth lining its jaws. Its eyes are golden in appearance, with small slit-shaped irises, which dominate the skull in terms of size.

The dinosaur also has small three fingered claws, each of which are used for grasping and killing its prey. The same goes for the feet, however, on the third digit of its foot, there is the trademark "killing claw", which represents its place in the Dromaeosauridae family.

On a final note, it's worth saying that these dinosaurs don't possess feathers on their bodies, despite most, if not all scientific models having proven that they did. They also possess pronated hands, something the real Velociraptor didn't have either.

In gameplay, these little dinosaurs are not much of a threat, they are weak, small and pretty slow, making picking them off really easy.

The most valid, and easy way for the player to kill them, is to enter Adrenaline Mode in quick bursts, take one well-aimed shot at them, drop them, and move to the next.

Spamming weaponry is ironically, not effective, as the Velociraptors' small size and fast speeds make the option ineffective and a waste of ammunition.

3 different kinds of raptors are encountered

an albino raptor from "Survivor"

Velociraptor quick time event
Add a photo to this gallery 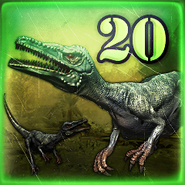 Trophy "These are not the Hammer", gained after killing 20 dinosaurs with melee attacks. 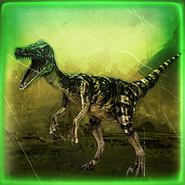 Trophy "Chicken Chaser", gained after killing 50 Velociraptors.
Add a photo to this gallery

Retrieved from "https://jurassic-the-hunted.fandom.com/wiki/Velociraptor?oldid=4767"
Community content is available under CC-BY-SA unless otherwise noted.